Blog - Latest News
You are here: Home / Blogs / Audits / What Taxpayers Who Pay Business Expenses With A Credit Card Can Learn From...

Why TIGTA Did This Audit

This audit was initiated because the Government Charge Card Abuse Prevention Act of 2012 (Charge Card Act), signed into law on October 5, 2012, requires each agency with more than $10 million in annual purchase card spending to submit semiannual reports of employee purchase card violations and the disposition of those violations, including any disciplinary actions taken. These semiannual reports (Purchase Card Violations Reports) are prepared by the agency head, e.g., the Department of the Treasury, and reviewed by the Inspectors General prior to the agency submitting the report to the Office of Management and Budget. The overall objective of this review was to assess whether the IRS complied with the Charge Card Act requirements for the period April 1, 2021, through September 30, 2021, and the status of prior Government charge card recommendations.

What The TIGTA Found –

The TIGTA reviewed the IRS’s purchase card program finding that controls are generally effective, and the number of purchase card violations identified by the IRS Credit Card Services Branch were minimal and generally for nominal amounts.

For the period of April 1, 2021, through September 30, 2021, the IRS identified 11 instances of confirmed purchase card violations totaling approximately $6,255, including the purchase of items such as toner cartridges and desktop supplies without prior management funding approval. There were nine instances in which the purchase cardholder did not receive required funding approvals prior to conducting the transaction, one that exceeded the single transaction purchase limit, and one personal use item. The 11 employees received disciplinary and nondisciplinary actions ranging from cautionary letters or notices to suspension. 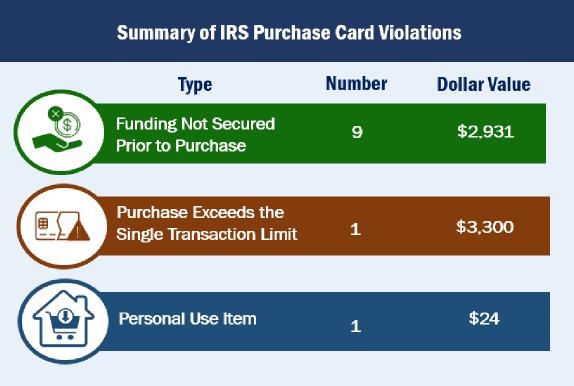 The Credit Card Services Branch also identified three purchase card transactions, totaling approximately $231, that did not comply with the IRS’s internal charge card policy guidance (for example, information technology items such as computer adaptors must be purchased by the Information Technology organization).

Taxpayers who are selected for audit by the IRS and pay business expenses with a credit card will face the same scrutiny as IRS officials who were audited by the TIGTA.

Proving deductions to the IRS is a two-step process:

Step One: Incurred And Paid The Expense.

For example, if you claim a $5,000 purchase expense from a distributor and this was paid using a credit card, you have proof that you paid the expense even if by the end of the calendar year you have not paid off the credit card.  This rule applies whether you are a cash or an accrual basis taxpayer.

Step Two: Deductibility Of The Expense.

Next you must prove that an expense is actually tax deductible. This is when having a copy of the bill or invoice is essential as it will show what was purchased and should support its business purpose.  If you do not have a copy of the bill or invoice, there are other ways to support deductibility such as the taxpayer’s testimony or advocating that a business could not operate unless it paid this essential expense (an example would be bills for electricity).

You know that at the Law Offices Of Jeffrey B. Kahn, P.C. we are always thinking of ways that our clients can save on taxes. If you are selected for an audit, stand up to the IRS by getting representation. Tax problems are usually a serious matter and must be handled appropriately so it’s important to that you’ve hired the best lawyer for your particular situation. The tax attorneys at the Law Offices Of Jeffrey B. Kahn, P.C. located in Orange County (Irvine), Metropolitan Los Angeles (Long Beach and Ontario) and elsewhere in California are highly skilled in handling tax matters and can effectively represent at all levels with the IRS and State Tax Agencies including criminal tax investigations and attempted prosecutions, undisclosed foreign bank accounts and other foreign assets, and unreported foreign income.  Also if you are involved in cannabis, check out what our cannabis tax attorneys can do for you.  And if you are involved in crypto currency, check out what a bitcoin tax attorney can do for you.