You are here: Home / Medical Marijuana 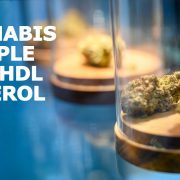 The cholesterol test checks your levels of:

The Center Of Disease Control states that a good HDL level is greater than or equal to 60 mg/dL.

In a study published on May 27, 2020 in the Journal of Dietary Supplements, researchers found that the daily administration of a commercially available, hemp-derived CBD oil extract is associated with improved HDL cholesterol levels.

Researchers affiliated with The Center for Applied Health Sciences in Ohio and Lindenwood University in Missouri assessed the health effects of a commercially available hemp extract versus placebo in 65 overweight but otherwise healthy participants. Extracts contained 15mg of CBD. Participants consumed either the extract or a placebo daily for a period of six weeks.

The study reported that those taking CBD experienced improved HDL (high-density lipoprotein aka “good”) cholesterol levels as compared to controls. Subjects consuming the extract also acknowledged improvements in sleep and an overall improvement in their quality of life. No significant adverse events were reported.

Researchers concluded, “Overall, these findings suggest that supplementation with this hemp extract at the provided dosage in the men and women studied exhibited improvements in HDL cholesterol, tended to support psychometric measures of perceived sleep quantity and stress response, perceived life pleasure, and is well tolerated in healthy human subjects.”

Developments like this contradict the basis of classification of cannabis under Federal law which makes cannabis illegal.

The Federal Controlled Substances Act (“CSA”) 21 U.S.C. § 812 classifies marijuana as a Schedule 1 substance with a high potential for abuse, no currently accepted medical use in treatment, and lack of accepted safety for use under medical supervision. Although you can still face federal criminal charges for using, growing, or selling weed in a manner that is completely lawful under California law, the federal authorities in the past have pulled back from targeting individuals and businesses engaged in medical marijuana activities. This pull back came from Department of Justice (“DOJ”) Safe Harbor Guidelines issued in 2013 under what is known as the “Cole Memo”.

The Cole Memo included eight factors for prosecutors to look at in deciding whether to charge a medical marijuana business with violating the Federal law:

Since 2013, these guidelines provided a level of certainty to the marijuana industry as to what point could you be crossing the line with the Federal government.  But on January 4, 2018, then Attorney General Jeff Sessions revoked the Cole Memo.  Now U.S. Attorneys in the local offices throughout the country retain broad prosecutorial discretion as to whether to prosecute cannabis businesses under federal law even though the state that these businesses operate in have legalized some form of marijuana.

Joyce-Blumenauer Amendment (previously referred to as the Rohrabacher-Farr Amendment)

Medical marijuana is legal in 33 states.

Recreational marijuana is legal in 11 states.

Eleven states and Washington DC, have legalized marijuana for recreational use — no doctor’s letter required — for adults over the age of 21. Those eleven states being Alaska, California, Colorado, Illinois, Maine, Massachusetts, Michigan, Nevada, Oregon, Vermont and Washington and the territory of Guam.

Building on the DOJ’s issuance of the Cole Memo, in 2014 the House passed an amendment to the yearly federal appropriations bill that effectively shields medical marijuana businesses from federal prosecution. Proposed by Representatives Rohrabacher and Farr, the amendment forbids federal agencies to spend money on investigating and prosecuting medical marijuana-related activities in states where such activities are legal.

The amendment states that:

“None of the funds made available under this Act to the Department of Justice may be used, with respect to any of the States of Alabama, Alaska, Arizona, Arkansas, California, Colorado, Connecticut, Delaware, Florida, Georgia, Hawaii, Illinois, Indiana, Iowa, Kentucky, Louisiana, Maine, Maryland, Massachusetts, Michigan, Minnesota, Mississippi, Missouri, Montana, Nevada, New Hampshire, New Jersey, New Mexico, New York, North Carolina, North Dakota, Ohio, Oklahoma, Oregon, Pennsylvania, Rhode Island, South Carolina, Tennessee, Texas, Utah, Vermont, Virginia, Washington, West Virginia, Wisconsin, and Wyoming, or with respect to the District of Columbia, Guam, or Puerto Rico, to prevent any of them from implementing their own laws that authorize the use, distribution, possession, or cultivation of medical marijuana.”

This action by the House is not impacted by former Attorney General Sessions’ change of position with the DOJ. However, unless this amendment gets included in each succeeding federal appropriations bill, the protection from Federal prosecution of medical marijuana businesses will no longer be in place.

Fortunately for medical marijuana businesses in the last budget extension approved by Congress, this amendment was included. This means that the DOJ is precluded from spending funds to circumvent any of the foregoing states from implementing their medical cannabis laws.

Given the illegal status of cannabis under Federal law you need to protect yourself and your marijuana business from all challenges created by the U.S. government.  Although cannabis is legal in California, that is not enough to protect you. Be proactive and engage an experienced Cannabis Tax Attorney in your area. Let the tax attorneys of the Law Offices Of Jeffrey B. Kahn, P.C. located in Orange County, Inland Empire (Ontario and Palm Springs) and other California locations protect you and maximize your net profits.  And if you are involved in crypto currency, check out what a bitcoin tax attorney can do for you.